HomeIn the Moment What does a merged Fox and Disney mean for free-to-air stations in Europe?

What does a merged Fox and Disney mean for free-to-air stations in Europe?

7th June 2018 By Jonathan Bailey Comments are Off

Free-to-air stations in the Top 5 European countries still rely on a great deal of US programmes to help their channels make advertising revenues. In 2017 major channels in the UK, France, Italy, Spain and Germany generated net net advertising revenues of 3.4 billion Euros from running US series and feature films according to ETS Revenue (net net = station earnings less discounts and less agency commission). US distributed programmes accounted for about 25% of the transmission hours in primetime on these channels.

Free-to-air stations heavily utilise a relatively small number of multi-episode titles, headed in 2017 by “The Big Bang Theory”. Of the 2 billion Euros generated by US series, the Top 20 revenue earning titles secured 1.3 billion Euros. Of those 20 titles, 19 of them were distributed by one of the following major studios: NBC Universal, Warner Bros, CBS, Fox and Disney. In 2017 within the Top 20, Fox titles generated 22% of all of the revenue earned and Disney titles generated a further 16%. These figures indicate that a new, merged company would own 38% of the market by advertising value for major US series. 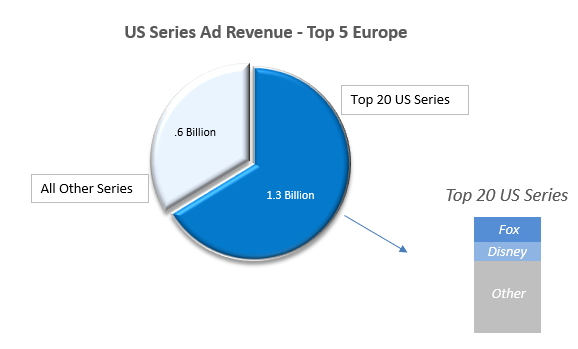 Feature films are a slightly more diversified market. Despite OTT and VOD, US feature films on major channels in the big 5 European markets still generated 1.27 billion Euros in ad revenue. Supply of these movies comes from a more diversified group of distributors with Sony and Lionsgate having significant shares of the market alongside the five distributors listed above. In total these companies’ titles produce 78% of the advertising revenue generated. A combined Fox and Disney would have a share of 24% well ahead of the current market leader Warner Bros.

Overall a merged sales team will have significantly more leverage to make deals in licensing free-to-air stations for their output, unless stations are prepared to look at smaller distributor output.

Essential Television Statistics researches the transmission of programmes in 40 countries globally to allow its clients to track, value and optimally negotiate the programme and format titles they license to national broadcasters. It works with partners Ebiquity and Madigan Cluff to place real estimates of the value created for broadcasters by these programmes.

We use cookies to ensure that we give you the best experience on our website. If you continue to use this site we will assume that you are happy with it.Ok